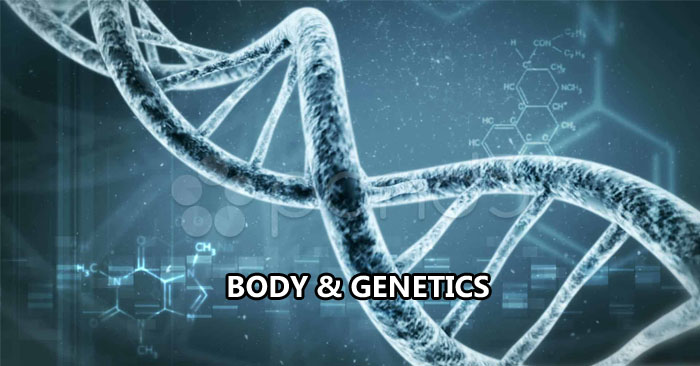 Genetics is defined as the science that deals with all aspects related to genes and hereditary properties that an individual obtains from his parents or ancestors. This means that everything that makes up the body is programmed via genes, be it appearance or internal functioning. We often hear bodybuilding practitioners point the finger at genetics, because it does not enable them to have a very good progress. Without going into too much technical detail, I will cover in this post several topics closely related to genetics by highlighting the factors that really influence physical progress.

In the minds of many practitioners, the following question often arises: Will my genetics have an influence on my physical progress ? The answer is quite simply : yes. As explained, genetics comes into play to define the whole composition of the body cells, the functioning of the organs, the “strong” points, the “weak” points of each. Each individual in this world has genetic limitations which mean that he will not be able to exceed a certain limit of strength, muscle mass, body fat rate, metabolism speed, …

The goal of the game will therefore be to get as close as possible to this limit, and to see how far he can progress to get there. Of course, reaching this point is no small task. This requires optimizing several systems to hope to approach it, and I’ll talk about it in this post. Go to the next paragraphs to find out the determining factors that will most likely define your potential in terms of physical progression.

The hormonal profile remains to my taste the most decisive factor in a physical transformation, from a genetic point of view. And if I have to cite just one major hormone, it will be testosterone. This hormone with a strong anabolic characteristic (helps in the manufacture of tissues), is strongly involved in muscle development, fat metabolism (therefore faster metabolism), increased strength, as well as more mental characteristics : aggressiveness and rage, very useful for feeling motivation and lifting heavy in a workout (take advantage therefore wisely). For an adult man (20 to 45 years old), the rate of testosterone production would be on average between 3.00 – 8.50 µg / l. With age, the production rate obviously decreases. So take advantage from it in your youth :).

Suffice to say that if your genetics give you the ability to secrete a relatively high amount of testosterone compared to the average, there is a good chance that you have great potential to make the most from the benefits of this hormone, and therefore, progress more easily and faster. However, you will only benefit from this advantage by being careful to optimize it and improve its performance. For more details, I invite you to read my article on how to optimize the recovery of your hormonal system.

The skeleton constitutes the first internal reinforcement of the body on which all of the organs, especially the muscles, are superimposed. Depending on the genetics of each, the bone structure will tend to be thin, thick, or in between. Having a thick bone structure will allow you to have a relatively higher basic muscle mass, but also greater potential for building muscle mass. This is explained by the fact that the thicker a bone is, the more it will have the capacity to support a large muscle mass. On the other hand, a thinner bone will more likely have a smaller base musculature. However, this does not necessarily limit the potential for mass gain. It can only be determined by trying to reach the genetic limit and by optimizing all the factors that allow it to be done.

The length of a muscle is defined as the length between the point of its origin (called insertion point) and the point where it ends (termination point). Genetics also play a role in determining these points and therefore define the length of each muscle for an individual. We often speak of two families of muscles: long or short. A long muscle, as its name suggests, is a muscle with a relatively low end point compared to the length of the bone on which it is inserted. In contrast, a short muscle is characterized by an end point that ends relatively high compared to the length of the bone. Finally, a picture is better than a thousand words:

As shown in the picture, the length of the muscle gives a different visual appearance between a long (left) and short (right) bicep. It is the same for all muscle groups in the body.

Now, the question that arises in many practitioners: will the insertions of a muscle have an influence on its growth ? The length of a muscle will certainly influence its potential for hypertrophy. A muscle with more length will be more likely to end up being bigger than its short counterpart. However, I am only talking about the general potential. A short muscle can also develop properly and be just as aesthetic. It is all a question of proportion, balance and harmony between the different parts of the body.

You progress when you stop comparisons

In order to better conclude this article, I provide you with a very precious advice : stopping the comparisons and doing with what nature has endowed you with is the first step towards guaranteed progress ! Instead of hiding behind the excuse of genetics and spending your time looking at what someone has or wanting to look like, it would be more important to set a goal and focus on a training program and adapted nutrition, and do your best to keep it for the long term. Genetics being a fixed and unchangeable factor, training and nutrition remain the only factors over which you can have control.

It is much more productive to focus on setting up a new environment that will allow the body to evolve towards the desired goal than on constant details which you are not able to modify. Taking control of what you can change, will eventually allow you to evolve to a much better version of you. You should therefore be the one against which you compare your progress over time. Who knows ? It is possible that your genetic limit allows you a good margin of progression. It’s up to you to put the chances on your side and try to approach it.