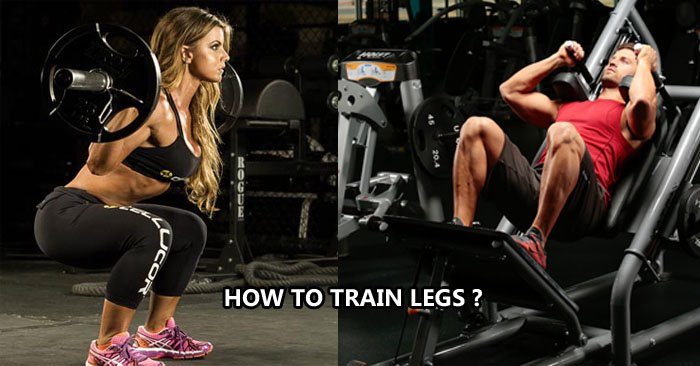 This post will be dedicated to a muscle group that is not the least : legs. For a good number of practitioners, the leg session is the least pleasant, reason which leads some to even skip it, to concentrate only on the upper body. Even with years of experience, training the legs is never a pleasure (if you are looking for real intensity). This difficulty is explained by several reasons: the energy expended, the pain, the nervous effort and the soreness after the session. Combine these ingredients in one session and you will have something to do a killer legday, and remember it for the next 48 hours.

It’s true that these constraints can stop more than one and discourage him from doing the legs, which is a big mistake. Neglecting leg training will create a huge imbalance of strength between the upper and lower body, without forgetting the disproportionate aesthetic aspect (chicken legs :D). From a calorie point of view, miss out on leg training and you will greatly reduce the speed of your metabolism and therefore your ability to burn calories. In terms of food, it is important to slightly increase your caloric intake during the day in which you work your legs.

The legs are the lower part of the human body allowing it to move. In fact, the legs are a set of several adjacent muscle groups : quadriceps, adductors, glutes, hamstrings, and calves. Each group among them is itself composed of several muscle heads, as shown in the image below :

I begin by clarifying that the leg muscles are involved in all of the polyarticular exercises for the lower body. However, there are exercise variants allowing to put more tension on one or more parts compared to the others. The most important thing is to make all the muscles to intervene equally during the exercises, so as not to grow strength imbalances, which it will be difficult to balance later.

We start with one of the most technical exercises in bodybuilding, the free squat. Talk to a lot of practitioners about the squat and you would already see their knees trembling :D. Indeed, the technicality of the squat resides in the fact of managing several parameters at the same time: the work weight, the posture of the back, the stability of the knees, the alignment of the feet, as well as respecting the balance during the movement. It is also among the exercises that put the most tension on the lower back, and therefore carries the risk of injury (especially if combined with a heavy weight and poor form).

The front squat is also an alternative to the classic squat if you want to put more emphasis on the quadriceps. On the other hand, you will not be able to put as heavy as the classic squat. Last precision, avoid the squat with the smith machine which does not offer a good freedom in movement, and generally forces to round the back to adapt to the rigidity of the barbell, while preventing you from developing a balance between the two sides.

On the machine side, the two basic exercises to remember are : the inclined leg press and the hack squat. The advantage of the press compared to the traditional squat is to be able to use more weight, while considerably reducing the tension on the lower back. It is therefore the exercise where you will have to invest the most effort during your leg session. The hack squat is also an interesting basic exercise for legs, in order to vary the way you work them. Although it greatly reduces the tension on the back due to its inclined angle, you will not be able to load as heavy as with the leg press. Last precision for all of these exercises: the spacing of the legs and their positions on the platform, will put more tension on the quadriceps (feet close together) or the glutes / hamstrings / adductors (more open legs).

If you are brave warriors and you are looking for more challenge, there are still basic exercises complementary to those already presented in this article : lunges (dumbbells or barbell) and deadlift with straight legs (dumbbells or barbell). The lunges can be performed in different ways: on the spot, by moving, or by putting the foot back on a bench (if you have a balance problem). I would point out that the length of the step will have a relatively influence on the targeted muscle groups. A small step will further solicit the quadriceps. On the other hand, a big step will put more tension on the glutes / hamstrings.

The glutes / hamstrings are precisely the muscle groups targeted by the deadlift. The peculiarity of this type of deadlift compared to the classic deadlift is that the legs remain tight all the time during the movement (the knee joint should not intervene), without seeking to put the barbell (or the dumbbells) on the floor. This has the effect of strongly stretching the fibers of the glutes and ischios.

To isolate each muscle group of the legs, there is no shortage of isolation exercises. There are a multitude of exercises and variations to do this. For the quadriceps, the classic that allows to isolate them is the leg extension with a rotation movement from bottom to top. As for hamstrings, the leg curl will do the work and can be executed in different ways : with the machine lying down or sitting. Finally, if you have a need to specifically target adductors, it is possible to work them using the machine intended for adductors.

The calves are the muscle group which growth is closely linked to genetics, insertions and length in particular. You will find people with naturally developed calves without even having put their feet up once in a gym. However, hiding behind the genetic excuse, will not improve the result. The exercises targeting the calves are generally based on a similar trajectory : vertical raises on the toes of the feet sitting or standing, which can be performed using a machine or a barbell.

Legs as a weak point, how to fix the imbalance ?

Having lagging legs is often synonymous with neglect of training. If you have a leg growth problem compared to your upper body, make sure you already train them with as much regularity and intensity as the upper muscles. Now, if this condition is checked and you are still struggling, then you will need to identify the muscle groups having the problem. The goal will be to improve the contraction of these muscles, especially in heavy polyarticular exercises.

Among the strategies to apply in order to enable them to contract, you can use intensification techniques during a learning period such as pre / post fatigue, very long and light sets. Thereafter, return to a classic training format. The super slow technique can also prove to be a complementary technique during isolation exercises, in particular to increase the time under tension of the targeted muscle. Increase the volume of work by adding more sets or even exercises. Finally, it is also possible to add a second leg session in order to increase their training frequency, as soon as you have recovered from your first session.