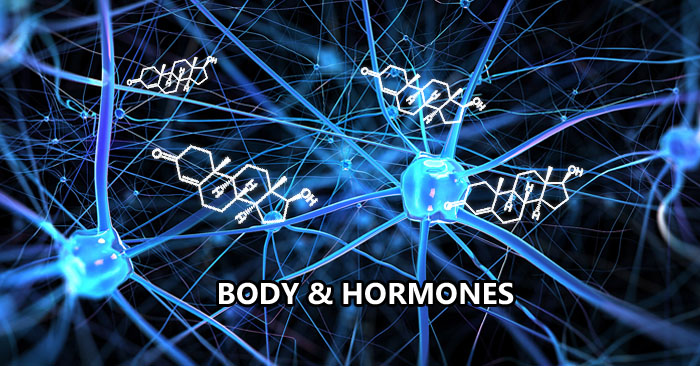 Hormones are defined as molecules whose role is to transmit chemical messages through the body, to ask the different organs to perform functions vital for its survival. From the regulation of blood sugar, to muscle growth through fat metabolism and other functions, each hormone regulate the functioning of the body so that it keeps working in a normal state. The goal is always allowing him to recover a state where he can continue to live normally. As bodybuilding and training generally, degrade muscle tissue and deplete energy resources, it is obvious that hormones are called to repair thoses damages. The object of this article is to highlight the hormones in close relation with the practice of bodybuilding.

In first position, testosterone remains in my opinion the most important hormone. Chemically, it is one of the hormones derived from cholesterol (C19H28O2 molecule). In addition to its androgenic characteristics, testosterone also has an anabolic aspect, impotant in building muscles. I remind you that anabolism is a process taking place within the body, which aims to build different tissues including muscle fibers. The role of this hormone is not limited to anabolism, but also contributes to protein synthesis, useful for the recovery of damaged fibers. Finally, it is involved in the activation of metabolism, and therefore, the metabolism of adipose tissue, in other words the fat burning process.

The level of testosterone produced by an individual is defined primarily by his genetics, but also by several factors related to his lifestyle. For an adult man aged between 20 and 45 years, the testosterone level would be between 3 and 8.5 µg / l, but decreases with age over decades. The goal is to try to have an optimal natural production and to keep a stable level of testosterone. This is why you need to improve your lifestyle and adopt the good habits that contribute to that.

Right after testosterone comes the growth hormone (GH). It is also a very powerful hormone, it is about growing the limbs and organs of the body. Growth hormone contributes greatly to bone and muscle growth, cell rejuvenation and many other functions, as long as they are produced naturally in sufficient quantity. Secreted in large quantities for children and growing teenagers, its quantity decreases with age, causing aging of cells and bones, and contributing to muscle wasting. For adults, the growth hormone level is between 3 and 5 µg / l, with a peak during the first hours of sleep. The production of a good level of GH is a characteristic linked to the genetics of each, but also influenced by the lifestyle. Like testosterone, improving your lifestyle will have a positive impact on your natural production.

Insulin is a hormone secreted by the body, specifically in the pancreas. Its role is to regulate the level of glycemia in the blood, following the digestion of meals. Thus, the food ingested will be transformed into energy to be used by the body or stored, according to the need of cells. In order to load cells with energy, insulin opens them to allow glucose to enter them and provide the required energy. Unused glucose is stored as glycogen in the muscles and then in the liver for later use. In addition, insulin has an anabolic characteristic, essential in the recovery of muscle tissue. In fact, as with glucose, insulin brings amino acids into the cells and thus repair muscle damage. The same for stored adipose tissue (fat), if the glucose intake is too much higher than the caloric requirement. On the other hand, glucagon is an insulin-antagonist hormone, also secreted in the pancreas. Unlike insulin, glucagon plays a role in the breakdown of the glucose stored in glycogen, releases it into the blood, to provide cells with usable energy.

Thyroid hormones (T3, T4) are hormones secreted by the thyroid, a gland located in the neck. These hormones are involved in regulating the metabolism of carbohydrates and fats, depending on energy expenditure and caloric intake. The lack of thyroid hormones will cause the metabolism to slow down, increasing the ease of gaining weight. The reverse is also true. In addition, they participate in essential functions in the body, such as the nervous system or the maintenance of bones. They are naturally produced with an adequate consumption of iodine. The body is unable to synthesize this mineral on its own, so it must be provided by nutrition.

Classified among the hormones of happiness, endorphins and dopamine intervene in the feeling on mental level, very useful in sporting activity and bodybuilding, particularly. For dopamine, it is produced in any situation that is supposed to generate pleasure (eating a cheat meal, having a huge pump, achieving a goal, …). Following the activity generating the release of dopamine, the pleasure felt will give you motivation to take action and will push you to repeat the practice of the activity in question, until you develop a certain dependence. Lack of dopamine will make you feel flat, drained of motivation and energy to set goals and work hard to reach them. A simple tip helps to regularly release dopamine, by dividing a big goal into several small ones. Successfully accomplishing each small goal will force you to continue until the main goal is achieved, thanks to dopamine !

On the other hand, endorphin is a hormone providing a feeling of happiness, pleasure and well-being, with the added bonus of a relaxing and anti-stress effect. It is released mainly during fairly intense physical efforts. Regular training and a long-term program will increase your well-being and significantly reduce your anxiety level.